← Connecticut Is Not Indiana
When Felons Run For Public Office →

What Happens When A Jewish Man Won’t Give His Wife A Get? 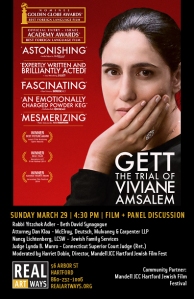 Under Jewish law, a “Get” is a document that a husband must give his wife to effect a divorce.  Without a Get, a woman who has obtained a civil divorce is still considered married under Jewish law and may not remarry.

The biblical requirement (Deuteronomy 24:1) that the husband give his wife a Get in order to formally end their marriage under Jewish law means that a recalcitrant husband can use the Get as leverage in a civil divorce.  Or he can simply be cruel and refuse to give the Get out of spite.  And in Israel, where there is no distinction between civil and religious marriage, and in very orthodox communities outside of Israel, a husband who won’t give his wife a Get effectively enslaves her to him.

A remarkable film, “Gett: The Trial of Vivian Amsalem,” explores the emotional toll on a woman whose husband refuses to grant her a Get.  The film will be shown at Real Art Ways this Sunday afternoon, March 29, and will be followed by a panel discussion which will include yours truly.

One of the issues the panel will discuss is the role that civil courts can play in forcing a husband to give his wife a Get.  A number of courts have addressed this issue, including a Superior Court in Connecticut, which held that a civil court can enforce a prenuptial agreement that required the husband to pay $100 day in the event of their separation until he gave his wife a Get.  (Click here for an interesting, albeit slightly dated, article on this subject.)

I viewed the film in preparation for the discussion: it is riviting and disturbing.  The legal issues the topic raises–both from a civil and religious law perspective–are fascinating and perplexing.  Can a civil court compel a person to perform a religious act?  Can a court impose money damages on a man who breaches a civil contract to provide a Get to his wife?  What are the First Amendment implications of civil courts ordering persons to fulfill religious obligations?  Learn the answer to these and other questions on Sunday!