← The Rule Of Law In Colonial Connecticut
The War On Christmas–Not! →

The Connecticut General Assembly recently abolished the death penalty, albeit on a prospective basis only.  The Connecticut Supreme Court will soon hear arguments on the constitutionality of executing individuals convicted of capital crimes before the death penalty was repealed.  While researching this issue, I came across a wonderful site that has archived early Connecticut laws.  Here are the crimes that our state forefathers deemed punishable by death in 1642:

In May 1650, the laws were updated to make it a capital offense for a child over the age of 16 to talk back to their parents.  I showed this to my kids; they were not amused. 🙂 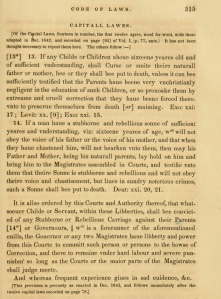